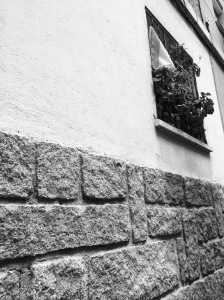 A window in Vallecas

A man with blood on his knuckles and his eyes on some weird kind of crack is riding the Metro. There is a homeless woman swathed in black who asks for centimes. A Peruvian immigrant down the calle Monte Perdido yells at her two sons, making them cry; neither of her children are  wearing shoes in a street with dog shit on every block, smeared in the crevices of paved lattice concrete. A Cerveceria strewn with rolled up, discarded napkins after the morning rush hour of cafe con leche and a bollo is quiet. Old men who gather on a bench infront of the Ajuntamiento, brown and wrinkled from the sun, discuss the end of the bullfight, the problem with “jodidas gitanas ladronas” and the lottery.

“Franco is laughing from the grave!” One says.

There is a paradox here: there is the constant smell of bad sewage and body odor and cigarette smoke mixed with the smell of baking bread and olive trees, lemons and expensive perfumes from the Corte Ingles on rich ladies who shop on calle Serrano. There is a deep, burning beauty in the eyes of a young girl who wears a red flower in her hair and swooshes an abanico in her dark hand. A family that meets at two for comida and a siesta in a city quieted by an afternoon of heat and closed up shop fronts. People are hot from the sun in Madrid. They’re thirsty. Some are hungry, suffering. But the suffering is like a season that lifts when the air is cool; when two young lovers meet by a window open to the sky. 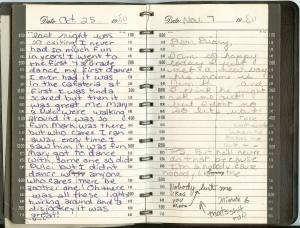 A page from my first journal

NPR is doing this awesome project called The Hidden World of Girls. So, dig up your old diaries and share them. The one I chose probably shows my best work at age eleven (Yeah, sad, I know). I sound so laid back, don’t I, when it comes to rejection? At least that’s what I wanted all my fans to believe…

Last night I dreamt that I was imprisoned in a dying world whose only news stories recounted tales of impending doom.  When I woke up I thought, wait a second; something sounds familiar!?  I was still angry with L for her doomsday post. I held her accountable for the way I reacted to it. Should I have? I’m not sure.

Quick background: A Facebook friend of mine posted an article from a not-so-reputable online magazine stating that the world would blow up in six months. I had just woken up, decided to click the link, read the article and I was henceforth depressed for hours, until D calmed me down by putting things into perspective. But I was truly pissed off that anyone would post such a miserable, gratuitous article, especially after it made them so depressed. Why do that? You’re in pain and suffering and so wish it upon others?

The egocentrism of the world is that people believe they can express themselves any way they want. They claim their “voice” and whatever else comes out of them is art. Part of the process of self discovery and sharing. And while that’s true for the young (“Wow! Look that at that big turd I just dropped in the toilet!”), adults should be able to decipher the difference between crap and true creation. The deeper, more penetrating aspect of art is not the art for art’s sake, but the influence it has on others and the consequences it causes.

I’m all for “finding” your voice and creating all forms of art–good, bad, hard to look at etc. But I believe people need to respect the fact that Voice is a powerful tool capable of influence. One voice has the power to give joy or take it away. Finding your voice and expressing yourself for expression’s sake is one thing. Reigning in that voice, taking responsibility for it and knowing how to use it is a far greater talent.

Share joy not misery. The propagation of “doomsday” literature is rather pointless. I can understand when people post ugly, depressing news about stuff we have control over and can change. Scary news that serves as a wake up call to take action. But the stuff we don’t have control over? Why bother posting it? The only purpose it serves is to depress, scare and hurt others, especially those more easily influenced by their emotions.

She didn’t appreciate that. She responded with:

I am…sorry for being so frank – but within certain OBVIOUS limitations, (things which we agree not to share and discuss as a society, for the protection of others) I am striving to find my own voice and will be the one who controls what I say and what I don’t.

To which I replied:

We all have enormous power when it comes to influencing others by what we choose to post. It is a challenge to you and others…if you had a choice to make people laugh today or feel miserable, which would you choose? We are not just floating bodies, disconnected from each other, able to do and say as we please without it affecting others. Sure you can say anything you want! Freedom of speech. But we are all connected. Your actions affect us all.

Bottom line? If something depresses you, and there’s literally NO POINT in its message why pass that depressing news on and in turn be the creator of depression in others?

Am I completely off the mark here? The ego is an illusion. We are all connected. Why can’t people see that when a river dries up in Africa, a sunset dies in Florida?

More a collector than a reader

Books to be returned…

Once I read a book, that’s it. I’m done. It’s not that I haven’t absolutely loved certain books– The Red and the Black, The Count of Monte Cristo, The Tao of Pooh, Tropic of Cancer, The Sheltering Sky, On the Road, White Oleander, The Book of Ruth, We Need to Talk About Kevin, Mademoiselle du Maupin, Madame Bovary, Leo Buscaglia’s “Living, Loving, Learning,” Anaȉs Nin’s “Journal of a Wife,” etc.– but there are far too many new books out there that I simply can’t justify re-reading anything.

Collecting books is a different story…I have a true fetish for books. In fact, I have about seven different editions of The Red and the Black. If there’s anything I’ve read more than once, it’s probably that.

To this day I still pride myself on not having central air in my house. For one, I enjoy windows open, birds singing, crickets chirping, cicadas whirring. You can’t hear a damn thing except a rattling air conditioning unit when the air on. That seems to take away all the glamour of living and suffering through the heat.

Besides, there’s something deeply romantic and Hollywood about the heat:

Sailor and Lula rage on about the heat in Wild at Heart.

Mister Senior Love Daddy confirms it over the radio in Do the Right Thing.

It’s an omnipresent theme in The Sheltering Sky…

But today it’s going up to 101 degrees in parts of Jersey, and we’re not talking dry heat where it’s cool in the shade. This is wet, humid heat, with no escaping; where the air feels thick and heavy like a giant boot crushing you. Air as still and soundless through the heavy limbs of trees like black oil spreading stagnant across  a dead pool.

Ain’t no sense in suffering through that. So, last night, my wonderful boyfriend installed a wall unit in my bedroom, and with the kids on the floor, and I in my bed, we slept in relative coolness.

I’m not all that proud of myself for giving in. But sadly, I’m getting older and the world is getting hotter.

Greenland. I probably never should have gone, and it was something akin to prison for the criminally and alcoholically insane. Cold and lonely as hell too. But it was worth it if only for the stories I can now tell. Read: The Caribou Club