Every truth passes through three stages before it is recognized. In the first it is ridiculed, in the second it is opposed, in the third it is regarded as self-evident.
– Arthur Schopenhauer

Last night I had a dream that I was invited to attend an annual symposium of Christians and non-Christians (non-Christians that is, whose belief in history, science and religion are not entirely Christian based). The argument from the Christians was, every year, that non-Christians are cold, scientific atheists who do not believe in God and therefore, are judged as faithless, empty heathens who aren’t going to heaven. The argument from the non-Christians, of which I was one, was one of defensiveness, that non-Christians are warm, loving, well-educated, spiritual people who are tired of constantly being judged falsely for not having the same beliefs as the Christians. We also contended that Christians are unrealistic thinkers who can’t exist outside the box of man-made religion and have no ability or will to redefine or reinterpret some of the old, outmoded verses of their bible that simply do not apply to life today or ever,and that faith is not fact and others should not be judged on their ability or inability to *believe* in one thing, when there are other things to believe in.

Everyone at the symposium was relatively friendly to one another, despite the black and white thinking. But sadly, the non-Christians only had about five tables to the Christians’ 15. Needless to say, I felt a little out-numbered.

As the symposium was about to begin, I ran to use the bathroom, which was rather dirty. As I waited in line, I saw one of the Christian boys stick his head down the toilet. I was horrified to see this. His mother, who was helping her youngest daughter in the stall next to the boy, yelled over to her son, “What the heck are you doing?” I then quickly jumped in and replied, “He’s sticking his head down a dirty toilet,” believing she’d jump up and grab him in outrage. But that didn’t happen. The mother, obviously exasperated by her situation and her son’s mindlessness, pulled both of her kids out of the stalls and simply said to her son, “Can you please behave?” And that was it. She dragged her kids out of the bathroom, her son’s head dripping wet, and they went to find their seats.

And then I woke up and thought this:

I used to believe that progress via technology and science was part of human evolution. That consumerism, capitalism and massive development was a natural human progression. I used to believe that anthropological societies like tribal peoples in Australia, Africa and South America who didn’t move forward and adopt new technology like “Westerners” were not evolving. That their growth was in some way, stunted. But after reading Vine Deloria’s God is Red I now recognize our progress is part of the trajectory of Christianity, not evolution. Progress, science, technology, manifest destiny, forcefully overtaking new lands from non-Christian peoples– many of these are Christian concepts.

I also thought, that just like the boy sticking his head in the toilet, people do crazy things that are interpreted in all kinds of ways. Even though I can be horrified over something seemingly horrifying, someone else may simply be agitated. Which response is correct? Which is the “true” response. Answer: there isn’t one. There never is. One-thousand Frenchmen can be wrong.

I think that it is so difficult for us to accept new ways of living and different cultural attitudes because we are so mired down in judging people for not being what we believe they should be. We believe, like I did, that there is only one truth, one way, one direction. I now know this not to be the case. There are many ways to live and progress. Christianity is not “the” way, it is “one” way. And yet, just like the mother in the dream, if I tried to convince a Christian of this, I’d probably be looked at like I had four heads.

The thought has occurred to me more than once. Buy property in Canada, you know, if America gets a little nuts. Not that it hasn’t already. In fact, I probably should have left long ago. But here are a few links to some stunning homes– none of which I can afford– in Nova Scotia, just in case. So who’s with me? Who wants to chip in a buy one of these babies?

One of a Kind

Lately, I’ve been obsessed with sex. Based on my last post it seems I shift from one extreme to the other. It’s got to be the beach and the fact that I see D all day long but can’t touch him (too many kids around, too many adults around, etc.). What an unappeasable temptation. Not to mention the fact that I’m probably on the hormonally insatiable side this week (was that a paralypsis?) 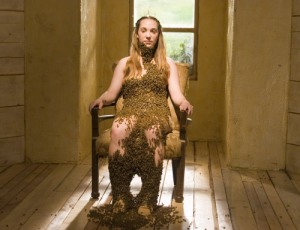 I slept like crap last night and nearly had a panic attack. When I finally did go somewhat under, I dreamed that I was being attacked by bees. They were covering my entire body and head as if I were a beekeeper, and the only way to get rid of them was to dive into a pool. D and I were covered together and constantly trying to hide from these bees.

I woke up, took aspirin for a bad headache, and fell back to sleep. In the morning I dreamed that I was in a huge parking garage in New York City which had many exits leading to the street, but some you had to walk through malls or bars to get out. I was with a bunch of business men and decided we we’d go through a bar before heading home and once inside, Alcoholics Anonymous was having some kind of convention. Everyone was drinking juice except this one guy. He looked much like BJ and he was drinking beer in a shots glass. Everyone was trying to convince him to quit drinking and he kept laughing at them saying, “you think your ways are right, but I’m the one that’s happy…”

I awoke early from a very strange dream this morning. I was at a coastal town and on the edge of the sea, up in the dunes was a cave-like area, dark and cool. And in this cave were the petrified remains of three people; one man who looked very much like Jesus and who was alone in his own section of the cave, and two women who had died in an embrace. A few others and myself sat down besides these stone figures, as if archeologists on a short break and Dani (my son) went to pick up the man. As he did so, he fell a part, quite fragile like, and needed to be put back together. A little later, we moved closer to the figures of the two women. We were all talking, gathered around them and suddenly both of them sat up and began talking. They at first were quite confused and could not remember what era that had lived through until suddenly one of them said, “I remember Ghandi.”

I was shocked to see these two stone women move and talk and I asked them questions for which they didn’t really offer any sensible answers. Overall, what amazed me the most was how happy they both were and how they kept chattering on about how lucky they were to have each other for all eternity in an embrace, while the man in the other section of the cave suffered and died alone.

Here’s some background info first: I’ve been sick for a couple days. Completely rundown. Actually, all my whining about being rundown from sheer pleasure has been a little inflated compared to Sunday night and yesterday. I truly hit a wall. This, after a weekend of excessive fun and pleasure. Oh, poor little hedonist and her rough life.

Anyway, I have been veering off my daily routine. Not myself lately. And it’s not that I am complaining. I’m not! But my subconscious is, in a sad, lost soul kind of way.

All that being said, here’s the dream:

I was with my family in a big house on a hill and at one point, I went to go to my own house, which was at the bottom of the hill in this little town of multi-colored row houses. I’d been many times before, but honestly, it seemed more like an old shanty-looking,  vacation home. So, I grabbed the key from my parents’ house and headed down the hill to see some of the stuff that I had stored there- namely, my journals.

When I got to the row of houses, mine was completely gone. Erased. And via eavesdropping on some of the residents, I learned that the owner of the town had burned down the house and took over the land to build his own place. He felt my house had been vacant too long and decided it was abandoned.

I cried hysterically and ran back to my family home, sobbing not so much over the loss of the actual house or my other stuff, but for the journals. When I told my mother what had happened, she said, “you go back to that man and tell him you want your things back. He owes you! He stole your property.”

So, I went back to go yell at him but before I got the chance, I came upon a resident who told me that the owner had saved my journals and that they were still in the basement (foundation), in the part of the house that wasn’t burned. On that news, I headed down into the basement, which was more a crawl space. I moved through cobwebs and dirt and darkness and there to the right was a huge, green incinerator filled from top to bottom with unburned books of mine, ready to be set afire. At the very top, as I climbed into yet a tinier, but brighter section of the crawl space (there was a window, though dirty), there I saw all my journals, safely preserved and painted gold.